Riley Sager's the Final Girls kept me up till all hours because I needed to know who did what. This new book, Last Time I Lied, if anything, kept me up even later! 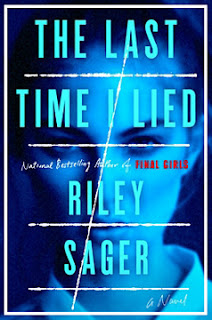 13 year old Emma Davis is sent to spend the summer at an exclusive girls' camp called Camp Nightingale. Her wealthy and neglectful parents have forgotten to even tell her she was going and as a result arrives so late there may be no cabin available to house her for the six weeks she will be there.
Then, the owner of the camp, Francesca Harris-White, or Franny as she wants to be called, a wealthy widow with two adopted sons, has an idea. She'll put her in the last space left, a bunk in a cabin with 3 older girls. These girls, Vivian, Natalie and Allison, will take her under their wing, especially Vivian, whose attention Emma craves. These girls and this summer will change Emma's life forever.
Fast forward 15 years. Emma is now an acclaimed artist. Her huge paintings each contain a secret. Painted beneath the trees and forest scenes three girls are hidden. The painted buried images of the beautiful and engaging Vivian and her two cabin mates are now all that remains of them, a mystery of three girls who disappeared that summer, and one that has haunted Emma ever since.
Could Emma have saved them? Was it her fault they vanished? What about the things she said, the accusations that ended up closing the camp and altering lives?
At a gallery exhibition a woman approaches her. It's Franny, the wealthy owner of the camp on the shores of a man-made lake called Lake Midnight. She has a proposition. Would Emma consider returning to the scene of what has traumatized her for those 15 years?
Franny is planning to reopen the camp and take the emphasis away from it being a camp for wealthy girls. It will now be free and merit-based. She would like Emma to be the art teacher. She has been forgiven for her part in that mystery.
Will Emma return for closure and maybe, just maybe, find out what happened to the girls who vanished from her cabin one night, so long ago?
If you're looking for the kind of intense read that grabs you and doesn't let you go until the very last page, then Last Time I Lied is the book for you!
Thank you to NetGalley for the DRC!
*note: in case you're interested, Riley Sager is the pen name of author Todd Ritter. 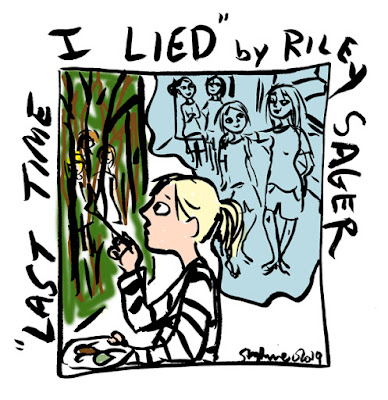