Secret Love: "If You, Then Me" by Yvonne Woon 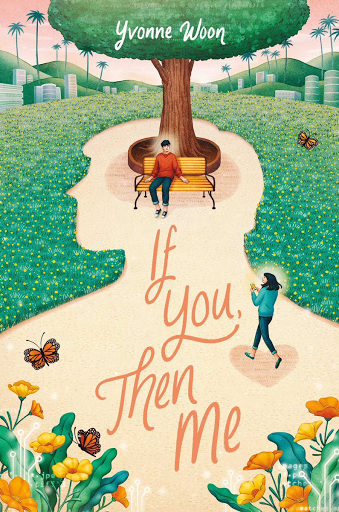 16 year old Xia Chang is something of a computer prodigy. She has created an AI program called "Wiser" that replies to your questions with the advice you might give yourself  when you're older. She lives in Massachusetts with her Mom, a political science professor, who is hardly home, as she works at 4 different colleges.

Except for her neighbor, Gina, Xia is pretty lonely and created Wiser to keep her company. Knowing Wiser is a unique creation, Xia has applied to a school for tech prodigies called "The Foundry". The unthinkable happens and Xia gets a call from the Foundry's director inviting her to join them in California's Silicon Valley at the institute, where all her expenses will be paid as she works on further developing Wiser.

While she waits to break the news to her mother who is going to be a tough sell, she has someone else to share her good news with. ObjectPermanence, her online soulmate, someone whom she's shared her secrets and hopes with, well, while using her own online persona U/ARRAYofLIGHT.

Once her mother finally agrees and Xia is off to the Foundry, we'll share her adventures as she joins the other 19 teens from around the country as they work to build their creations in hopes of startup money and becoming coding rockstars.

I loved this book!  You felt you were part of the new world Xia has entered, and were cheering her on from the sidelines. Xia experiences so much in her new school, and is stronger than she thinks, as she faces the sexism of the largely male tech world and works at trying to fit in and make friends with classmates who are also competitors. There's also the verbal bullying from a couple of entitled white boys who delight in humiliating her right from the start. And there may be a boy, who seems to be someone who "gets" her. Could there be more to him than he seems? Does he like her... or is he just trying to find out the secrets behind her AI?
Then, something happens that takes her in an unexpected direction, at a party,  Xia has a casual meeting  with a young woman, famous for the apps she created, and whom Xia had idolized. What happens next and throughout the rest of Xia's whirlwind trajectory from nonentity to notoriety in this unputdownable story is something you've got to find out yourself!

I haven't read Ms. Woon's previous books, but she has created one of my favorite characters ever in Xia, a young woman so smart and resilient and quick and funny that you'll find yourself wondering about her and her future long after you've turned that last page. This is highly recommended, and one I'll be Militantly Recommending! Thanks to NetGalley and Harper Collins for the DRC! Posted by Stephanie at 9:23 AM No comments: