Heart of Darkness: "Blood and Silk" by Jeffrey Love

Blood and Silk , a gorgeous re-imagining of the Beauty and the Beast legend, begins with a curse. The curse is placed on a Prince, Alexiel of Ravenswood, a handsome lion headed figure, by a sorceress, Frytania, a woman whom he spurned. His casual rejection of her after their dalliance prompts her to use all her powers to destroy his life ... and destroy it she does. The only way to lift the curse would be for him to finally accept her. "If not you?" Alexiel asks her. "Then you must find a replacement." The replacement must learn to love Alexiel as he is for the curse to be lifted. Is there someone out there who could learn to love the cold hearted Prince?

Charles Alverdine, a formerly wealthy merchant, now fallen on hard times, his second wife, and 6 children have been forced to leave the city where they had resided and move to a cottage on the outskirts of a small village surrounded by forest. The merchant's older daughters grumble about the move but everyone else tries to make the best of things, including his youngest son, the beautiful Circelae, who loves the land, the flower gardens and later, after he and his father are called to meet with the town's Steward, the town library.

One afternoon, while heading home from the library, Circelae decides to find his way back through the forest. The forest that seemed to call to him. Losing his bearings, eventually he finds his way out where he is met by the Steward who gives him a stern warning to stay out of the woods.

This event will change the course of Circelae's life and that of everyone he knows. It seems he has caught the eye of a King and this King has sent word to Circelae's family that he desires Circelae's hand in marriage.

I won't spoil the mystery of this haunting tale and its exquisitely realized world and the unusual love story at its heart. If you are longing to read something that is both memorable and surprising then be sure to get a copy of "Blood and Silk" ( Oh! One more thing, it is illustrated with absolutely beautiful illustrations). 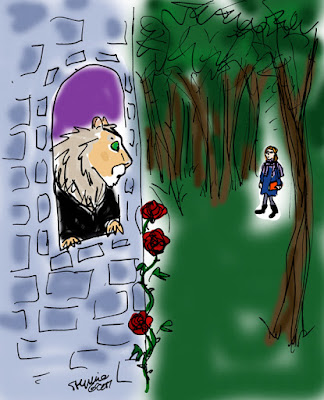