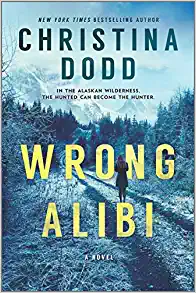 This was the first Christina Dodd book I've read and it had me from the first sentence!  I listened to it on audiobook through hoopla and it was grippingly narrated by Vanessa Johansson. A good narrator makes or breaks an audiobook and Ms. Johansson definitely made this a listen to the end experience from the start!

It is set in Alaska, a place I have always found fascinating as a setting for a story, and begins with Petie, a young woman caretaking at a fishing camp in the wilderness, she is dealing with a wild winter storm and a power outage, but is self sufficient enough to be able to get things working again.  How she came to be living such a solitary existence unfolds as we learn that not long before she had been a resident of a juvenile detention home in California, and her name had been Evie Jones. Abandoned by her mother and sister, her caseworker helps her find a job.

This job turns out to be working for a seemingly well-off man who wants an assistant to help him with his business in a house filled with antiquities in a small town in Alaska. This man, Donald White, meets her at the airport and has her drive his fancy jaguar despite the fact that she only just got her license.

As she cleans and prepares food and does computer work for Mr. White, he also makes some odd requests of her, that she deposit large sums of money in a bank account in town that is listed under her name. He explains that he is saving money to help the former owner of the house who is being help prisoner by a rebel gang in a foreign country. He tells her the man's wife sold him the house took her son and went to live with relatives until her husband's release. He also tells her he'll be away at times and that she never look in the basement because she might get injured going down the stairs leading to it.

What happens next will hook you into reading, or listening to the very end, as Evie/Petie finds herself framed for a double murder and the story takes off from there and is filled with some surprising twists and turns and reveals! If you love a good thriller filled with great characters, a unique setting and that wraps everything up perfectly, then this book is for you! 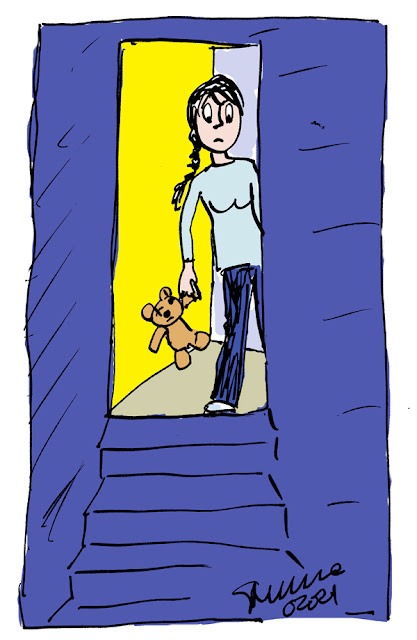 Posted by Stephanie at 9:16 AM No comments:

Hit Girl: "Finlay Donovan is Killing It" by Elle Cosimano 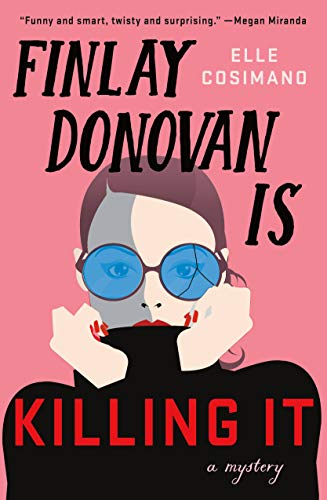 Not many books make me laugh out loud, but Elle Cosimano's Finlay Donovan is Killing It is such an enjoyable read I started telling everyone I know to get a copy!  It's funny, suspenseful, and has some hot guys thrown in for good measure! Right from the first couple of sentences Finlay has us on her side. A single mom of two young kids, Finlay, an author of police thrillers, is trying to make ends meet after her husband dumped her for the realtor who sold them the house she's now living in. It's not the career she'd hoped for and doesn't brings in much beyond a meager advance. Her ex, Steve and Theresa (the realtor) are doing fantastically while Finlay has to keep asking her ex to help bail her out of her financial problems. He's also fired her nanny, Veronica, someone she depended on.

Arranging to meet her agent at a local Panera, and throwing on dark glasses and a wig-scarf, so the manager won't recognize her and kick her out for previous troublemaking, she hopes Sylvia might be able to get some more money out of her publisher. Frustrated by her recent writing, and worried about it becoming too formulaic, they discuss contracts, characters and killings before Sylvia takes off to meet with another client, Finlay returns to her table to find a mysterious note under her plate. A note that says :
$50,000 cash.
Harris Mickler
and an address and a phone number.

There must be some kind of mistake. That kind of money could turn things around for her. But was this some kind of joke? I don't want to give away any further details because it is so much fun following Finlay as she tries to navigate a new reality and that this might just be the first of a series is more good news, because this is the kind of book you just don't want to end!
5 Stars! Thank you to NetGalley for the DRC! 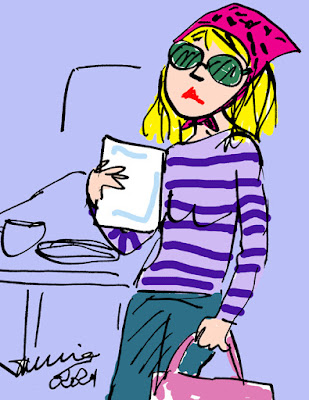 Posted by Stephanie at 9:59 AM No comments: