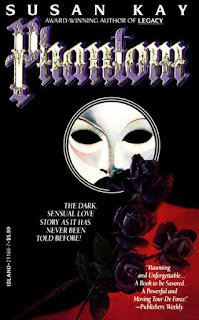 Jennifer Linforth's seductive series gave us a look at Erik and his future. But what of Erik and his origins? Where did he come from? What sort of life had he led that brought him to the depths of the Paris Opera House? Susan Kay's classic was perhaps the first, the first I've ever read, anyway, that took Gaston Leroux's character and created a whole life around him.
Written in segments and alternating viewpoints this spellbinding story is operatic in scope. Beginning before Erik's birth, his mother, Madeleine, is a great and spoiled beauty always getting what she wants including a brilliant and handsome architect husband. Their life together seems like a fairytale... until the day he leaves his newly pregnant wife to visit a building site and never returns, alive, that is.
Madeleine is devastated but at least she has her child to look forward to. Surely he would take after his father and be a tribute to his memory.
Erik enters the world unloved by his shallow mother. The first piece of clothing she sews for him is a mask.  As a boy, his genius is evident at an early age. He longs for affection from his mother who can't give it and responds with cruelty. Eventually, at the age of nine, he runs away only to face a harsher existence as a gypsy side-show freak caged and exhibited. Not long after he commits his first murder.
From this point, Erik wanders the world, expanding his talents and skills at every level. He apprentices to a master mason who treats him respectfully and with great kindness. Later, he meets the Persian, Nadir, Daroga of Mazanderan who was sent to bring Erik back to the court for the shah who has heard wondrous tales of the magician brought back by travelers. Forced to create amusements for the shah and his mother, including some unique torture devices he tempers this madness with affection for Nadir's son.
His journey takes him to Paris and a friendship with the architect and designer of the Paris Opera House, Charles Garnier, and the plans for the labyrinthine world beneath the Opera House begin to form and take shape ultimately leading him to Christine. This is a story filled with heartache and an overwhelming poignancy for the man who was brilliant among all others but vilified and feared for his face. Erik's never ending hope for love and affection throughout his life is heartbreaking and the last chapter will bring a surprise that will leave no reader unmoved.
Susan Kay's "Phantom" is a masterpiece that gives us an Erik who is sharply alive and ready to take you by the hand and lead you into his dark and tragic world.
Posted by Stephanie at 12:21 PM No comments: 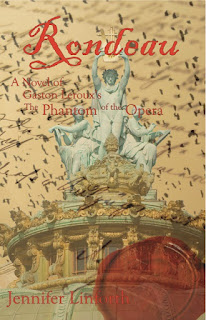 Book 3 of  the beautifully written and thoroughly enthralling Madrigal series starts off with Comte de Chagny Raoul and Christine celebrating the 16th birthday of their son, the vicomte Andre. Joining in the festivities is old friend Police Inspector Jules Legard, Andre's godfather and... an uninvited guest, the sinister bounty hunter Loup, who has returned to extort money from Raoul for information on Erik and Anna, who have vanished to no one knows where. Or have they? Loup seems to have some idea and Raoul wants proof before financing the merciless hunter any further although he would dearly love to see Erik behind bars at the very least.

Miles away, Erik and his family are ensconced safely, so they believe, in a monastery in Germany. Erik and Anna have two fantastic and amazing children. Philippe, a beautiful and perfect 15 year old with hints of genius and little seven year old Simone who carries the curse of the Phantom on her face and his love for music in her heart. Erik's devotion to his family has redefined his life and when Loup tracks down Anna and kidnaps her he is bringing down the wrath of the Phantom on all involved.
Jennifer Linforth has created a world and life for Erik that we can completely believe in and become emotionally involved in. Erik's pain at the reaction of people to Simone when first delighted by her violin playing they then see her face and turn from her in horror is almost unbearably moving, as is his statement that she will never be masked.  The story takes some surprising turns when lies are revealed, truths told and alliances and friendships formed, and tragedies averted. The spirited and talented heirs to the Phantom's story and history, Andre, Philippe and Simone come to life on the pages. We meet, again, Erik's old ally, the Persian, Daroga, and this relationship is expanded and developed so charmingly it is just perfect.  I LOVED this book. There were parts when tears threatened to short-out the kindle. If you want to lose yourself in a romantic, heartbreaking story of love, revenge and redemption then READ this series NOW!
Posted by Stephanie at 5:17 PM No comments: 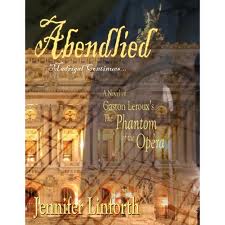 As we continue with book 2 of Jennifer Linforth's engaging Phantom of the Opera series, Erik and Anna are on the run making their way away from Paris traveling on the fringes of vagabond and outcast encampments and not exactly sure which crimes they are wanted for. There had been a murder, which was completely justified and a barn fire but that somehow doesn't seem to warrant their unrelenting pursuit by a mysterious tracker. Along the way they picked up a fellow traveler, an old man with a wry sense of humor who is not afraid of Erik despite all his efforts to shake him off. Pappy becomes a true and loyal friend to the pair and a voice of reason on many occasions.
Meanwhile, unbeknownst to Erik, he is being blamed for the death of Raoul's brother, Comte Philippe de Chagny, whose body had been found by the lake in the cellars of the Paris Opera House.
Then there is Christine, consumed with love for her Angel of Music and mad with jealousy of Anna. When she could have stepped forward and told the truth of what happened to her when she was kidnapped by Anna's evil father she never did and things have a way of spiraling out of control when one lie leads to another. Now, with Erik blamed for Philippe's death, Raoul sets Loup, a merciless bounty hunter, after them. Surprisingly, Loup could care less about the Phantom, it is Anna he would truly like to hunt down.
Abendlied is a compelling sequel to Madrigal. Ms. Linforth creates a uniquely sadistic villain in Loup. She also breathes life into Leroux's secondary character of the Comte Philippe de Chagny. He becomes a heroic ally for Erik and a moral conscience, very much someone who commands the pages he's given in this story. She has also made some brave choices with where she takes Erik, Anna, Raoul and Christine in their separate and intertwining love stories. READ this NOW and take this journey into the life and mind of our favorite Murderer, Maestro, Magician, Mastermind. Next week I'll continue the series with Rondeau.
Posted by Stephanie at 9:21 AM No comments: