I am always excited when there is a new "Dark Musicals" book by Laura Deluca, especially when it stars one of my all time favorite fictional characters, Lord Justyn Patko, and his lovely, smart and brave wife Lady Rebecca Hope-Patko!

There may be spoilers ahead for anyone who hasn't read this series, so be aware and if you haven't read the series begin with Phantom, and meet Lord Justyn and Rebecca at the beginning of their relationship!

So, when Haunted was released, I couldn't wait to download it (and might have to get this one in print!)
Lord Justyn and Lady Rebecca are huge stars of the stage. They are beloved as the Phantom and Christine, which they have starred in on Broadway winning raves and devoted phans all over for their performances. Now they have been invited to England to headline the Woman in White musical being filmed there with an all star cast. Even their son, Erik, will have a bit part.
They arrive and check into their hotel and at once there is a mystery, a woman dressed in white, has left them a welcome basket. Was it a publicity stunt? No one at the hotel seems to know.

They make their way to the set and meet all the other cast members, each famous in their own right, (one particularly stands out, Stephanie Piro, a huge star, nominated for 16 Emmy Awards as a daytime soap Diva, plus she has a way with younger men!) (and also making an appearance as a co-star is another memorable character, Emma Kathryn!)!
One of their best friends, Frankie, has a part and they are happy to see him, but the Director of the film, Kyle Whelan, is another matter. He is bossy and demanding. He orders his assistant around and bullies anyone who doesn't do as he asks.

This might be a problem, but Rebecca's bigger concern is the way Justyn has been acting. The love of her life has been distant and elusive since their arrival. What could it mean? Was their marriage in trouble? Before this trip, Justyn saved Becca's life by taking another, and he has been plagued by nightmares ever since. Was he blaming her? Maybe Darlene, her mother-in-law, can help her figure things out when she arrives with Erik and their baby daughter Harmony.

Will things improve for this devoted couple? And will they survive the filming, as trouble seems to follow them wherever they go and mysterious things seem to be happening on set. Be sure to grab a copy of Haunted and follow Justyn and Rebecca as they deal with everything this seemingly cursed movie tries to involve them in!

* Heads up, too, Dark Musicals fans, at the end of Haunted, there is a preview of a new series with Erik Patko as the lead. The preview was enough to have me waiting for the whole book, it was that grabby and gripping! 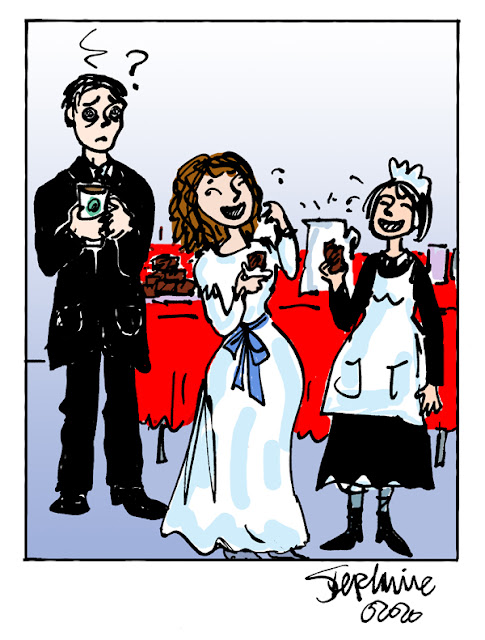