Love at the Top: "Leaving Everest" by Megan Westfield 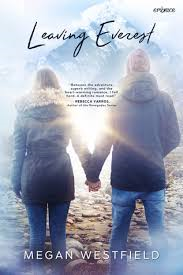 Emily Winslowe's life has been one of adventure, following her mountaineer Dad to some of the highest, most dangerous peaks in the world, and she has been able to hold her own, summiting even Everest, alongside him and the climbers who he guides through his company Winslowe Expeditions. She loves the mountains and can't imagine a life without having access to them.
There's one other thing that she enjoys, a game of filming a 360 degree video panorama of her summits called #YCCM and checking those of someone else, those of Luke,  a boy she has know most of her life who is now attending college in the US.
This summer is looking to be a challenging one for Emily. There's the Everest climb with her Dad, and finding a way to tell him she has decided not to go to Washington State to attend a college where she has a free ride. She has already taken a gap year. Her dream, instead, is to climb the top 5 mountains in the world.
Returning from a climb, the Father and daughter take a break at the home of Mingma, a Sherpa woman friend and the widow of a man who had been an associate of her Dad and his company, killed in a climbing accident. She is also the mother of Luke, and a younger son, Pasang.
Emily has been longing to see Luke. He is not only her best friend, but someone she dares not tell that she has secretly been in love with him for years. Her heart stood still when she started noticing an American girl show up in some of Luke's videos.
As they are preparing for a meal at Mingma's, suddenly, there is someone leaning in the doorway. Emily can hardly believe what she is seeing. Is it really Luke? How can he be here and she not have known?
And so begins a heart-stopping adventure story and a completely believable love story set in a part of the world most of us only get to in movies or books and Ms. Westfield makes you, the reader, a part of the expedition. You will experience what it's like in the build up to making the attempt to climb the most treacherous mountain in the world and get caught up in Luke and Emily's love story, one of unspoken feelings, secrets and surprises. This is a book you will want to revisit, and characters so real you want to follow their journey beyond the pages of this wonderful story. Plus, I LOVE the cover! 10 Stars (and 10 mountain peaks)!  Highly recommended! Thank you to NetGalley for the DRC! 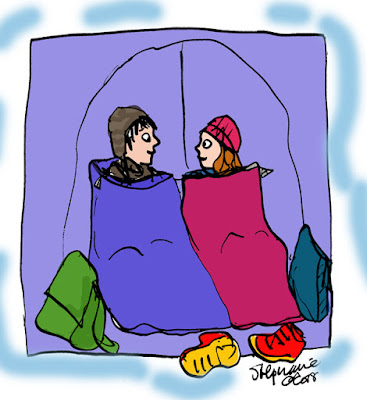 Posted by Stephanie at 4:32 PM No comments:

Try to Remember: "The Final Girls" by Riley Sager

Quincy Carpenter is a Final Girl. She was the last girl standing at the end of her own private horror movie... the one where her college friends were all murdered at the cabin they were staying in for a celebratory weekend. Instead of making memories to last a lifetime, the only memories are the ones haunting Quincy. That weekend was 10 years ago. The incident was so shocking she has buried the details deep in her subconscious.
Now, she makes a living baking exotic, fancy baked goods, photographing them and blogging about them. She lives with her public defender boyfriend and takes the occasional Xanax when things get too stressful for her. The other constant in her life is Coop, the policeman who arrived at the scene of the murders and discovered a blood covered Quincy escaping the woods and running straight to him, begging for help. He's been there for her ever since, anytime she needs him.
There have been two other Final Girls over the years, one of whom reached out to Quincy. The other went underground to escape the media coverage. They knew what happened to them. One wrote a book about it. Will Quincy remember what went down that night? Or are these details buried for a reason best left forgotten?
Miss Sager's "Final Girls" is absolutely gripping, surprising and unputdownable! The Recommeder stayed up really LATE to find out what happened and then was heard to be yelling "NO!" at the kindle, so it is THAT kind of book and one that I highly recommend! If you love thrillers, books with intriguing characters and an ending that will keep you thinking about it long after the last page... then be sure to read The Final Girls! A BIG Thank you to Edelweiss for the DRC! 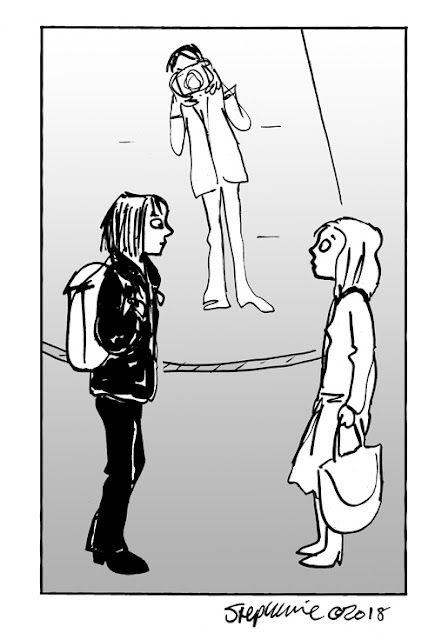 "Island of Sweet Pies and Soldiers" by Sara Ackerman 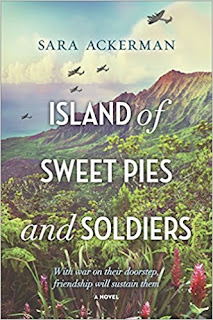 I have to say, right up front, that I completely fell in love with the world author Sara Ackerman  has created in Island of Sweet Pies and Soldiers! It is a charming and heartfelt story of family, girlfriends and soldiers stationed on a lovely Hawaiian island during WWII, after Pearl Harbor, and brings that time period to vivid visual life so realistically  you can picture all the characters coming alive on the page.
Violet Iverson is a young woman who is the Mom of Ella, a troubled 10 year old girl. One day, a year previously, Violet's husband, and Ella's father, Herman, mysteriously disappeared. Despite all the sheriff's investigations, there is not a trace of this good family man and Principal of the local school. At the same time, Ella began shutting down and exhibiting signs of stress. Is it just a young girl's sadness at the disappearance of her father? Or something more?
Trying to move on with life, Violet, who is also a teacher at the school her husband had been Principal of, has invited Jean, another teacher to share her home and the two women create a warm and loving space for Ella, as they try to comfort the girl. Other friends include a Japanese family who run a small school and the problems they face during this time period. And, of course, there are the soldiers who are stationed on the island. Jean's brother surprises her by showing up at the house the women share and brings along some soldier buddies... one of whom seems to take a shine to Violet. These soldiers also have a rather unusual mascot... a lion cub named Roscoe. Will Roscoe help Ella come out of her shell? Grab a copy of  The Island of Sweet Pies and Soldiers and enjoy finding out for yourself! Thank you, Edelweiss for the DRC!
This book should come with a warning because if you don't live in Hawaii... the descriptions of the locale may make you want to relocate!
And, here's a link to the pie recipes the author shares
Pies
This is a link to a story about the real Marines stationed on the island during WWll and their real mascot: Roscoe, and a photo of a combat photographer, Richard "Dick" Stotz: Marine Corps Combat Photographer at Iwo Jima stationed there with Roscoe: 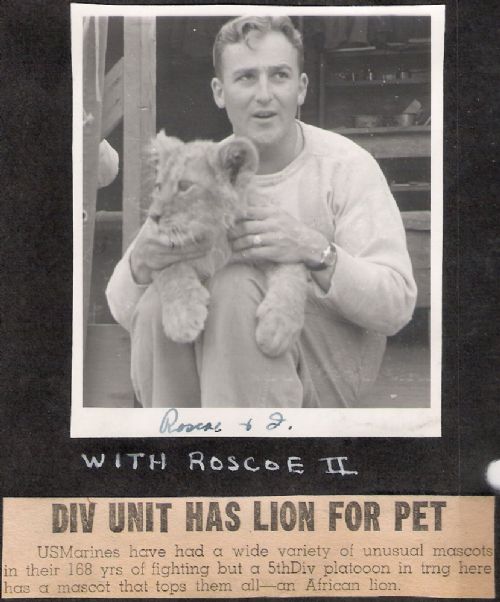 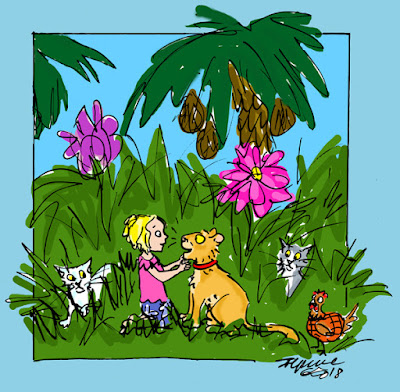 Posted by Stephanie at 4:20 PM No comments: