The Recommender is a big fan of Laura DeLuca's Dark Musical series from the very first one that introduced Lord Justyn Patko and Rebecca Hope as teens involved in a school theatrical production of Phantom of the Opera. Over the years and through the series we have followed them as they grow and age through college, summer theatre and to Broadway stardom, marriage and parenthood and each book was based around a musical. Also, the couple seem to attract "the crazies" as they call them and each book features some murderer or other that seems to target our favorite couple.
Reanimated is based on a version of Corpse Bride, or Ghost Bride, as it is called here and Justyn and Rebecca are now co-owners of a dinner theatre along with Tom and Carmen, their long time friends. This dinner theatre was featured in a previous book, so be sure to read the whole series to know the back-story.
They have hired kitchen and wait staff and actors who will be performing the original production of Ghost Bride.
Meanwhile, Rebecca has been doing something else besides acting, and taking care of their wonderfully talented son, Erik, who is also an actor, and their baby daughter, Harmony. Tired of being a victim, she has been taking shooting lessons and is the owner of a licensed handgun. And, she and her friend Victoria, have decided to help  women who have been abused and are in need of safety by working for an underground Railroad led by a dedicated Detective and a cabbie.
As with Ms. DeLuca's previous books, this one will grab you and pull you into the lives of Lord Justyn, Rebecca, their children, family and friends. It's a compelling story complete with murder, crimes and ... wait! Is something wrong with Lord Justyn? Surely this can't be the last book in the series, can it? I was yelling "What???  and "Oh, No!" at the Kindle during parts of this one! Not giving anything away, though. No spoilers, here!
If you are a fan (or Phan) of Phantom, musical theatre and murder mysteries along with original characters, then be sure to check out all of the Dark Musical books and you, too, will fall for Lord Justyn, just like I did when he first stood at the back of the school auditorium and watched his future soul mate audition for the part of Christine! 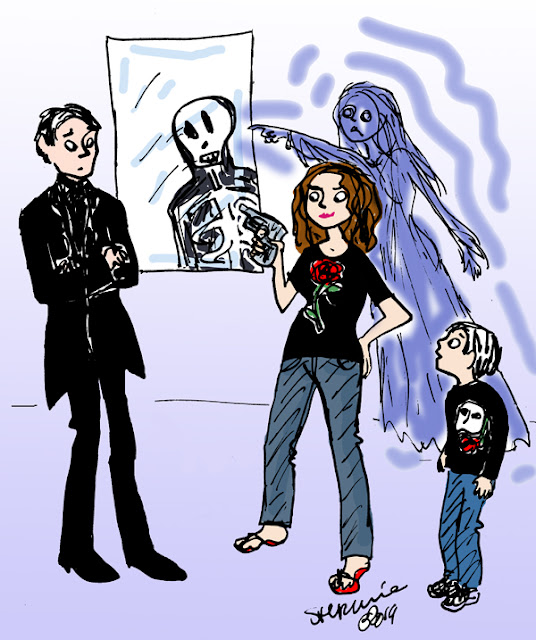 Below is a song, one of several referred to in the book, brought to you through the miracle of youtube!

Posted by Stephanie at 2:30 PM No comments: