All in the Family: "About Face" by Wendy Coles-Littlepage 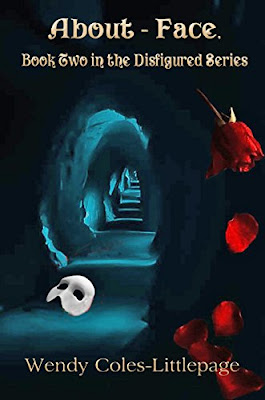 When we last left Erik and his beloved, Sylvie, the beauty who had been his former cook, in Ms. Coles-Littlepage's first entrancing Phantom story Disfigured, they were
happily newly married.
In this continuation, Sylvie and Erik Bessette (Erik having adopted Sylvie's surname) and their young daughter, Marie, now live on a beautiful chateau estate complete with a vineyard. Their dear friend Celestine Giry lives there as well and Erik had also gathered a company of interesting characters to work the vineyard and care for the estate. All seems perfect. Sylvie is expecting a second child and while it was true, this was a much harder pregnancy than her first, the couple sees no reason things with this one should not go as well.
But then, an unexpected and surprising visitor arrives on the estate. It is none other than Christine Daae! She is now, not surprisingly the Comtesse de Chagny. But how did she ever find them? The reunion is tense, Erik greets her without his mask, she knows what he looks like, he mutters to Sylvie.
After introductions are made, Christine says she was merely visiting friends in the area and decided to see if she could find Erik and see how he... and Celestine , and now, Erik's wife and child were all doing. Tea is served and Erik abruptly exits leaving Sylvie to face her mythical rival, the woman whom Erik destroyed the Opera House for and caused him to leave so much devastation and death in the wake of his mad passion for her. They make awkward conversation, some confidences are shared before Celestine arrives and she and Christine are reunited.
Erik, having stalked off,  leaving the two most important women in his life alone, is still bewildered by Christine's presence and all the memories it stirred up. Eventually, gathering Marie, he returns. Christine fusses a bit over Marie before Sylvie requests Celestine join her and Marie in the garden to admire the flowers and also giving Erik and Christine the opportunity to speak privately. Which they do, before she takes her leave.
Her visit was not a mere social call, it seems, but the beginning of a betrayal that leads both Erik and Sylvia along paths not of their choosing and adventures they might not have dreamed of nor hoped for. About Face is a worthy follow-up and a sequel any Phantom phan will want to read! 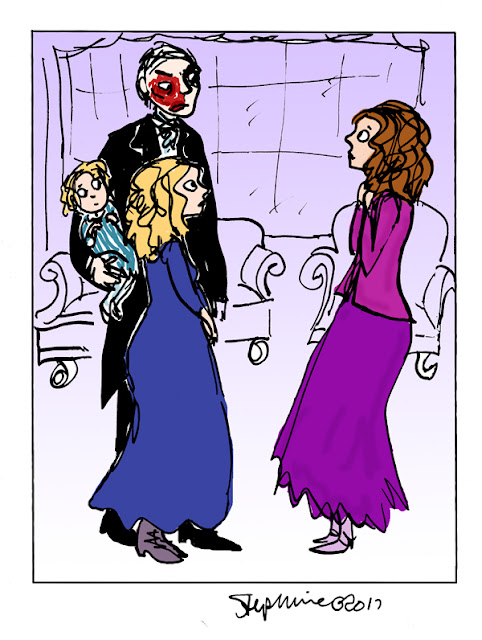