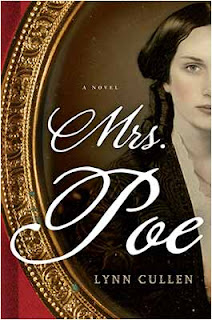 Mrs. Poe by Lynn Cullen is a dark and sweepingly romantic fictionalized account of the life of Edger Allan Poe, his young wife, Virginia, and a woman poet, Frances Osgood, who may have meant more to Poe than just being a colleague.
As a kid, the Recommender read all of Edger Allan Poe's works I could get my hands on. Those stories stay with you, as do his poems of loss and longing. I didn't know much about his personal life... but thanks to this  gorgeously written and imagined book he comes alive as a grand, romantic and troubled genius. A man who married his 13 year old cousin when he was 26. The book is primarily about Frances Osgood, called Fanny,  who besides being a gifted poet and famous for her translation of "Puss in Boots", is also the mother of two girls who has been abandoned by her portrait painter husband and taken in by her friends, the Bartletts (the husband of this couple, John Bartlett, will go on to become the author of Bartlett's Familiar Quotations). Fanny is in dire need of earning her own income after her husband's desertion. As the book begins, she is making the rounds of publishers hoping to sell some of her poetry, but a new fad is taking the New York literary scene by storm. Everyone, it seems, is mad for Mr. Poe's "The Raven". Fanny is advised by a publisher to write a scary story or verse geared toward the ladies.
As for Poe, he is the rock star of 1840s New York and everyone who's anyone wants him at their event or salon.  As it happens, Fanny is invited to attend a salon where all the literary notables gather (including Horace Greeley, Walt Whitman, John James Audubon and many others) and where Poe is to make an appearance. Which he does...with the now 23 year old Virginia. We will learn more about the Poes as Edger and Fanny become acquainted and realize they may have much in common, and then Virginia seemingly reaches out to befriend Fanny as well. What can it all mean? I won't give away any of the pleasure or mystery of reading this addicting story for yourself.
The author vividly recreates the New York of the 1840s with all its sights and sounds and smells. In that, it reminds me of my all time favorite 1800s New York book, Time and Again, by Jack Finney, although that book is pure fantasy and Mrs. Poe is filled with all the riches, and gossip and celebrities of that bygone era and also depicts the poverty and illness that caused so many early deaths and in the author's afterward, you will learn what became of all our leading players. I found this book unforgettably haunting and one that stayed with me for days after reading it. If you want to lose yourself in another time and place and become wrapped up in the drama of the life of literary New York and the characters who populated it  then look no further. Mrs. Poe is a treasure and one you'll want to reread and research and remember. 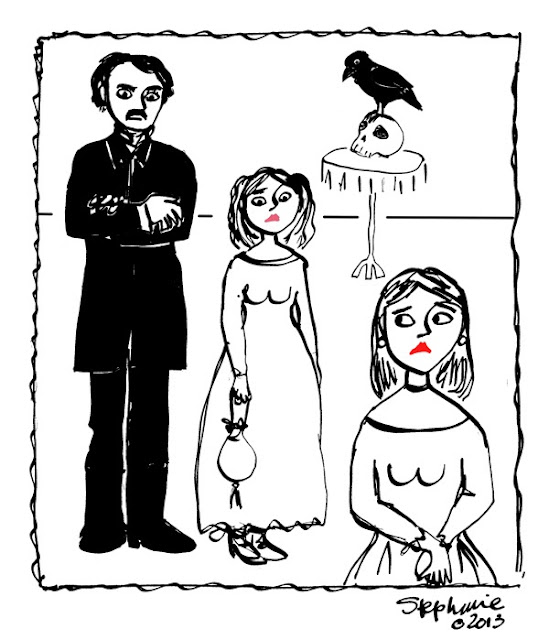