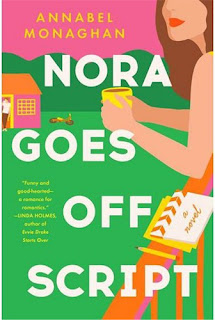 I have read a string of great books, recently. Books I absolutely loved! But Annabel Monaghan's Nora Goes Off Script is perhaps my favorite of them. The author made me fall in love with her characters (Leo!!)  and the story around them and made me want to visit and hang out and be besties with them, too!

Nora Hamilton is living in the country on and old farm that has a unique feature, an old stone building with a fires place and a view of the woods that you can see straight through when the door is left open. It is here that Nora, a scriptwriter for a romance TV channel, does her writing.

She is now a single mom of two kids. Her husband blew through his trust fund and used up most of the money she earned on his failed ideas and business plans. Then, he has the audacity to dump HER! Then, she realizes she is relieved he's gone!

So, she does what any writer might do in her circumstances. She writes a script dealing with that disaster of a marriage and sells it, not to the Romance Channel, but to Hollywood! And then, not long after, a film crew shows up complete with maybe the two most famous actors in Hollywood or on the planet! Leo Vance and Naomi Sanchez will be playing Nora and her ex! Can her life get any crazier?

We shall see! Because what follows is one of the funniest, heartbreaking-ist and endearing stories you will read next year (as it isn't released until June! Put that release date on your calendar!)! A BIG thank you to Edelweiss for the DRC! I'll be recommending this one a lot! 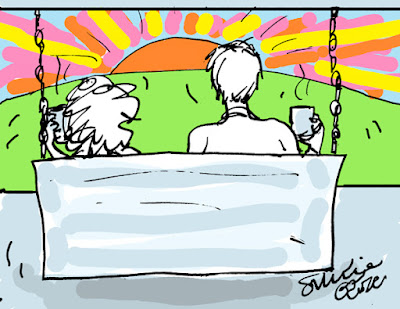 Posted by Stephanie at 12:09 PM No comments: 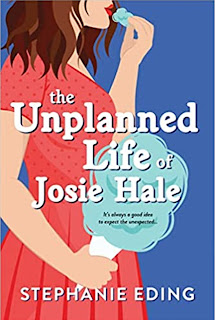 Josie thought she had her happy ending. Until she found her husband with his assistant at the Veterinary clinic where they worked. This was after they tried to make a go of their marriage one more time! So she packed up, quit her job and left Chicago to head back to the small Illinois town where she grew up and  her parents' home. She never got to tell him the big news. That she was now pregnant. Instead, she's jobless, living with her parents, and feeling pretty pathetic.

To cheer herself up, she goes to the county fair, craving a corn dog, while also trying to keep a low profile from the home town friends she grew up with. No sooner does she park herself on a bench to eat when she is recognized by the last two people she expected to see, her old best friend, Kevin, and her high school crush, Ben.

Joining her table for lunch and catching up, she confesses all that happened to her and what a loser she feels like. Turns out, Ben had an equally sad past few years and Kevin is working for his dad at the family insurance company. The two friends are living in the house Ben bought for his own failed marriage. Kevin comes up with a plan, a pact whereby they would strive to improve their lives in a year. He calls it the "Corn Dog Pact".
Going back to her parents, and thinking things can't get much worse, she finds out they are selling their house and moving into a small condo. There would be no room for her to live, too. She was essentially homeless!

Meeting up again, a short while later, with Kevin and Ben, they  make a proposal, that Josie move in with them.
Can this be a solution? Or will it bring more problems? Josie is a spunky, funny and smart young woman. And Kevin and Ben are both the kind of guy any girl would love to move in with! Unless they are jobless and 3 months pregnant.
This is such an engaging read with characters you will love and root for and cheer on as you follow their stories. I loved this one so much I was sad to finish it, as who wouldn't want to hang with those three? Highly recommended, but be warned... it will leave you craving a corn dog, even if you never had one! Thank you to Edelweiss for the DRC! 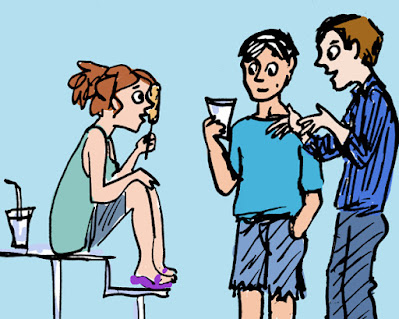 Posted by Stephanie at 11:34 AM No comments:

Off the Map: "Mexican Gothic" by Silvia Moreno-Garcia 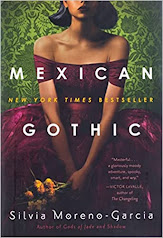 This is the first book by Silvia Moreno-Garcia that I've read and it is SO good! This is the kind of grab you and read till the very end even if it means staying up ALL night kind of book I love!
Our heroine, Noemi Taboada, is young woman used to a sophisticated lifestyle with many men falling for her as she makes the rounds of parties and dances as well as studying anthropology at college. She’s beautiful and smart and when her father tasks her with trying to find out what ails her beloved recently married cousin, she sets off on an unforgettable journey!
Noemi is everything you want in a star character. She's beautiful, and uses that and her ability at socializing and small talk to her advantage when faced with some unusual characters and disturbing circumstances. She's also smart, tough and loyal to her ill cousin. Be prepared for mystery, creepy goings on and an unexpected love story.

It’s a popular book and recently optioned for a Hulu series. Though I can’t imagine the TV version will do as good a job of recreating this story as the author did in print (and your imagination does when reading!)! Trust me when I say there are scenes when you will yell "What the heck?!" How they'll film that, I don't know. But don't wait for the series, read it first! 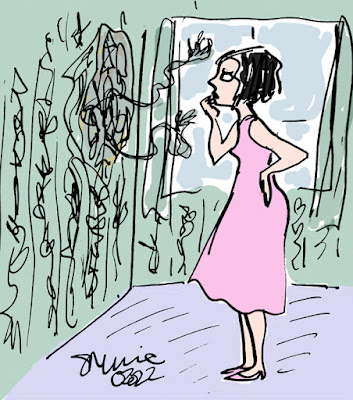 Posted by Stephanie at 11:41 AM No comments: