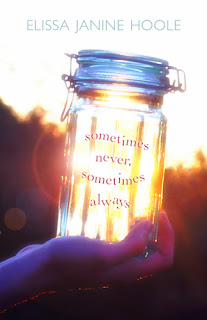 Sometimes Never, Sometimes Always, by Elissa Janine Hoole, is filled with realistic characters and a thought-provoking story. It begins with The Three Best Words That Describe You, the first question on a survey making the rounds among Cassandra Randall's friends. She is at a loss as to how to answer, this, the first question... not to mention all the following ones. Cass is struggling to find her own identity as the non-religious member of a very fundamentalist religious family. Her best friend, Kayla, is leaving her behind in her wake of coolness and her brother, Eric, is harboring a secret that puts him in conflict his faith. Her family used to be kind of normal until a family tragedy brought them into the Joyful News fold that meets 3 times a week and maybe makes her parents and sister happy, but Cass is suffocating under their rules and intolerance.
Hoping to find her true self she decides to be open to new things, so when Kayla pushes her to fill in for a girl who did the layout for the student paper, but is currently in treatment for an eating disorder, she relents and takes it on, because it is a skill she possesses having worked on the Joyful News newsletter.
Then her English teacher requests the class follow Walt Whitman's example to "celebrate and sing themselves". One more thing Cass needs to deal with in trying to figure out who she is, really, on her own, outside the circle of friends and family. And, there's the boy, in the seat next to her in English class, Darin, who is funny and oddly appealing. Does he like her? Why would he?
Eric had given her $20.00 as a birthday present hoping she'll choose something she'd like rather than pick something out for her, so when Cass goes into the bookstore something unexpectedly takes her eye. A deck of Tarot cards. Are these what she needs to set her apart and make her someone unique? Someone interesting? Get a copy of Sometimes Never, Sometimes Always and follow Cassandra as she discovers more and more about herself in this engaging, addictive and highly recommended story! 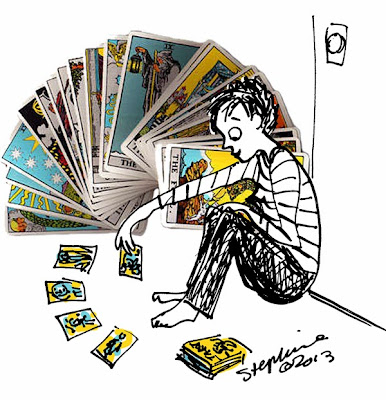 Posted by Stephanie at 11:45 AM No comments: