Jepp Who Defied the Stars 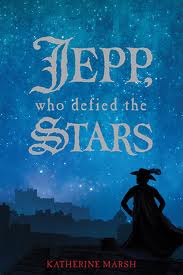 Jepp is a boy who was raised by his single Mom and brought up in a tavern/rooming house that she runs in the small (fictional) town of Astraveld in Holland. He is relatively content, is pretty smart having learned to read and write and is much loved by the few locals who depend on the inn for their livelihood. He is also a dwarf. Something he doesn't really dwell on... unless travelers to the inn happen to point it out.

He has never known his father, something that does bother him, but has not made an issue of finding out his identity. One day a stranger arrives at the inn. He is worldly with a long title but called "Don" for short. He has a proposition for Jepp. How would he like to live a grand life as a member of Coudenberg, the court of the Infanta Isabella Clara Eugenia and her husband Archduke Albert of Austria. As a court Dwarf.
Surely his mother wouldn't want to part with him? But she wants him to succeed and advance himself and this seems like a perfect entrance into a better way of life. Is it? We shall see. So begins this intriguing story set in the late 1500s with a truly unique protagonist that we care about and  root for from the opening page.
"It is lucky you found me" Jepp says to Don on their coach trip to Coudenberg. "There is no luck", Don confides, "Only the stars. That is where our fortune or lack of it resides". Puzzling words. The stars play a role throughout Jepp's life. It is a time of great belief in astrology.

Jepp arrives in Coudenberg and all that Don describes is true! A luxury apartment, fine clothes, exotic and tasty food, and, oh yes, there are 3 other dwarves who reside there. It takes a bit of the spotlight away, but one of them is an attractive young woman. Things are looking good! Or are they? And, Don never mentioned anything about a pie. A rather large one.

This is just the beginning of Jepp's journey, a journey which will open his eyes to the intrigues and whims of those in charge of his destiny. He will learn to keep some things secret and who can be trusted... and who can't. And we will learn with him (plus what the title means). This book will be released in October so put in your pre-order request and find out just where Jepp's journey, and those stars, will take him. This is the first book the Recommender has read by Katherine Marsh and I will definitely look forward to reading anything else she's written! 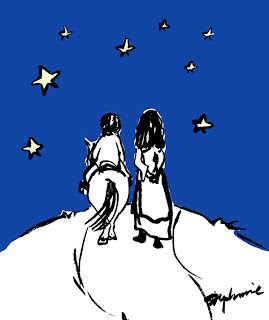 Posted by Stephanie at 7:20 PM