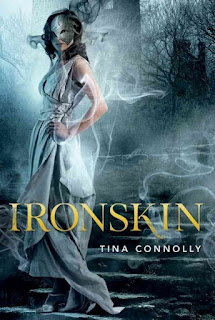 Ironskin  is a magical steampunk fantasy Jane Eyre-like story and from the first page I was drawn into this original world that the author, Tina Connolly, brings to vivid life.
Jane Eliot was a survivor. There was a war. A war between the populace and the fey. The fey are a bodiless being highly skilled in a technology that supplied the locals with power called bluepacks that was so advanced that civilian power advancements are abandoned to such an extent that when the fey tire of  providing their energy source after creating a dependence... it's back to the dark ages for many. Not only that, after they begin a war on the same people they'd once helped, the fey having no bodies of their own, remember, would kill humans and take over their bodies so that the dead would turn and attack their friends and families until killed again with iron. Iron is all that can keep the fey at bay or kill them. Scary stuff. Many were lost in the war and many who survived bore fey scars. Scars which made their bearer feel amplified moods and affected those around them with an increased amplification of their own moods. Jane's scar being "rage", she keeps it contained behind the "ironskin" mask that covers one side of her face. Scarred as she is, she possess a quick and sardonic wit and a plucky sense of adventure so when she sees an ad for a governess position for a child "born during the war", she decides to give it a go and accepts the position.
"An ye be human...enter" an odd butler says to her when she knocks at the door of her new home.  She steps across the iron threshold and into a new life.
This life will introduce her to the master of the house, Mr. Rochart. He is a brilliant sculptor although the masks Jane takes in on the walls of his studio are hideous. He is also the father of five year old Dorie, a child both enchanting and frightening. Her "scars" are not visible. Dorie has the ability to command objects to come to her or float in the air without touching them. She can make blue lights sparkle around her. Fey light, perhaps.
How and why Dorie came to possess these abilities is one of the secrets you will have to uncover yourself as you read this entrancing book. You will also find out what Jane discovers about Edward Rochart's other skills. Skills so remarkable they attract a bevy of beautiful women to pay calls on him (not THAT kind of skills! Get your mind out of the gutter! It's not that kind of book!), and begin to make Jane jealous. Jealous because she realizes she is coming to care for this mysterious man and his unusual child.  And what of Jane's sister who has married well and seems superficially happy in her letters but desperate to have Jane return to her. Intrigued? Then go buy a copy or request your local library to order "Ironskin" so you, too, can cross that iron threshold ...An ye be human... and enter this new and extraordinary world!
. 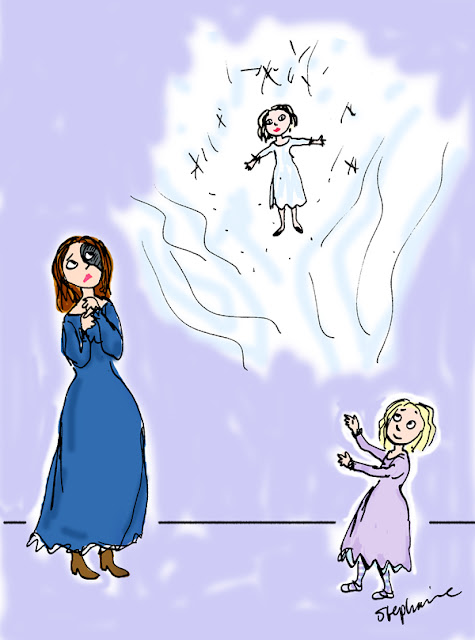 Posted by Stephanie at 6:15 PM