I know, I know, the Recommender has certain obsessions. We will deal with those other obsessive genres as we get to them. For now, let us return to the world of that mad genius Erik, or the Phantom, in three books I recently read and which I found intriguing and well written.The first title is Phantom : Edge of the Flame by Kristine Goodfellow. 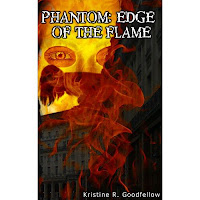 In this original take, Erik is en route to a destination in the French countryside when he chances upon a carriage stuck by the side of the road. This carriage contains an attractive American woman, Olivia Weston, who has arrived in France for an extended visit to her cousins the de Chagnys. Struck by the sight of her stranded by the roadside, Erik commands his driver to stop and offer her a ride. She accepts... and as they share the ride (until this carriage, too, becomes incapacitated) Erik becomes more and more taken with the charming young widow. As they get to know each other and eventually continue their journey, Erik begins to understand certain complexities regarding Olivia's reason for visiting. Yet, they are drawn to each other, so much so, that Erik risks everything to sneak inside her bedroom at her cousins estate, time after time. Could she be the woman he has always dreamed of, someone to accept him and perhaps even come to love him? You'll have to buy, borrow  or download it to see.

The second title gives us the classic triangle of Christine, Raoul and Erik: My Phantom: the Memoir of Christine Daae by Anstance Tamplin. The story begins with Christine reading Leroux's new sensation "The Phantom of the Opera". Leroux had the story wrong, Christine tells us. Even her late husband, Raoul, never knew "how close the Phantom came to winning my hand. He will always have my heart". Great opening!
We then go back to the beginning of their story. After her father's  death, the lonely young Christine comes to the Opera House as a student of its singing school. Weeping by herself in a corner one day she is startled by a voice asking her why she is crying. Mistaking it for the Angel of Music sent by her father she brightens at the voice... the voice being the Phantom's who, silent for a moment responds "And here I am".
Years later, the mirror to her dressing room opens... and a man enters. "Don't be frightened, Christine. You're not in danger" he tells her... and, at the sound of his voice, she recognizes it as her one true friend and soon to be her teacher, her Angel... her Phantom. They fall into a routine of Christine visiting the Phantom in his home beneath the Opera where he trains her voice and occasionally takes her out at night to see and hear the popular singers of the day from whom she can learn. They have become close though she longs for more intimacy... the intimacy that, back in the outside world, the dashing young naval officer Raoul waits to offer her. The tension between the Phantom and Christine will keep you longing for more with this beguiling love story you won't want to miss! 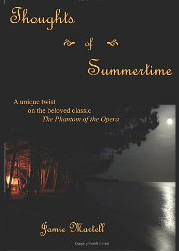 And, now for something completely different, Jamie Martell's Thoughts of Summertime. Christine, after losing her mother, runs to the woods in despair after the funeral.  Lost, and desperate, a voice reaches out to her from the woods, asking why she cries, comforting her, then instructing her how to find her way back. Grateful , she begins to head off, then turns and asks if she might "see" him again. He replies she should return the next evening.  She does.
What interests does she have to take her mind off her troubles the voice inquires. "I love to sing" she replies. He asks if she would sing for him and she does, a Swedish lullaby. He is impressed with her talent and offers to instruct her. She mentions the Angel of Music and that she had wished for his visit. As they part company Christine asks what should she call him? "Call me Angel" he says. It is, of course, Erik.

Scene 2: The estate of the evil Vicomte Raoul de Chagny (yes, it is he, though evil, as mentioned!) and Erik is his business manager! In fact, Raoul says to Erik "You know I can't do a thing without your counsel!" This is a very radical approach to our beloved characters and ... it works. Erik  continues to meet with Christine (or at least his voice does),and before you know it six months have passed. All seems well and both are happy. Too happy, you might ask, for a young woman who is falling for a disembodied voice, and Erik who is falling for Christine in return. Alas, yes. Christine pleads with her Angel to show himself, to tell her he returns her feelings. He agrees at 9:00 that night, to meet in their wooded refuge.  Meanwhile, Christine's father is deep in debt to Raoul. So in debt he is about to lose everything. But, there is one thing Raoul will take in exchange for forgiving that nasty debt. His daughter's hand in marriage. He agrees and that night she will be taken away and held captive at the de Chagny estate as Raoul's unwilling fiancee. That night, Erik will feel rejected and betrayed by the woman he has come to love. Is there hope for our star-crossed lovers? Will wrong things be righted? This is a particularly entertaining story. I loved the depiction of Erik as a man with secrets, intense, charismatic and seductive and Christine as a strong woman doing what she has to do to get by. You will, too!
Posted by Stephanie at 1:03 PM