The Militant Recommender is thrilled to have as its first Author Interview the amazing Mr. Mike Mullin!

I’m thrilled to be here, thanks for inviting me!


Hi there, Mike! Thank you so much for taking the time to answer a few questions for the Recommender!


I don't like to give away too much in the reviews I do, as I'm sure most readers love the thrill of a good story evolving without remembering some critic that revealed too much, so these are pretty basic questions.


That’s good; I’ll try to provide basic answers, ha! I’ve had my second cup of coffee already this morning—wait, that’s wrong—it was my third, so we should be okay.


I've read a lot of end of the world themed books, but "Ashfall's" scenario and the suddenness and the realism of the disaster grabbed me right from the start. What gave you the idea of using a supervolcano erupting and its aftermath as the theme of your novel?


The idea for Ashfall started with another book—Bill Bryson’s A Short History of Nearly Everything. Dozens of novel ideas lurk within its pages, but the one that stuck with me was the idea of a supervolcano eruption at Yellowstone. A few weeks after I read it, I woke at 3:30 am with a scene occupying my head so completely I was afraid it would start spilling out my nostrils. I typed 5,500 words, finishing just before dawn. Then I put the project away and let it gestate for eight months. When I returned to it after researching volcanoes and volcanic ash, I realized the inspired scene I wrote in the middle of the night wouldn’t work, and ultimately that whole section had to be scrapped. The only word that remains from that draft: Ashfall.


Alex is a regular kid, someone readers can easily identify with. He also has a kind of hidden superpower. He holds a black belt in taekwondo and right at the beginning, when he's trapped by his desk, that first comes into play. What was your inspiration for giving Alex those impressive martial arts abilities?


I knew the disaster in Ashfall would be so terrible that my protagonist would have to be a special teenager to survive. And although I love the current crop of dystopian novels, some of them feel more like fantasy than science fiction to me, so I decided to try to differentiate Ashfall by making it intensely realistic. That ruled out magic, superpowers, and vampirism (thank goodness, right?). So I decided Alex should be a martial artist. The only problem: I didn’t know anything about martial arts. At that time, I was reading every book I could find about volcanoes to try to learn enough geology to write Ashfall—I didn’t want to add a huge stack of martial arts books to my to-be-read pile. So I enrolled in taekwondo classes. I enjoyed the classes and stuck with them, finally earning my black belt just before Ashfall was released last year.


I love that Alex's survival skills kick in and he's smart about adapting to the new reality he's faced with, like using the skis to get around. How did you conceptualize these adaptations?


Many of my ideas came from my reading. Somewhere I read about a volcanologist who relies on snowshoes to traverse fresh ash more easily. It seemed more plausible that Alex could find a pair of skis than snowshoes, so I made Alex’s dad an ex-cross-country skier.


The parts of the book that relate to outdoor survival and primitive living come from my personal experience. I was intensely interested in survival as a teenager—I even spent three days in the woods with nothing but a knife and the clothes on my back once. Now I prefer to stay in hotels instead of improvised shelters, but I remember what it’s like to skin a rabbit and tan its hide.


Darla is one of the most impressive female characters to appear in YA literature. She's tough, smart, has amazing mechanical know how and also has a softer, sweet side. She's not just Alex's girlfriend, but a complete and complex character in her own right. Was she based on anyone you knew in real life?


Yes. Darla is largely based on my wife, Margaret.  She’s just as tough, smart, and loyal as Darla. Sadly, she can’t fix our cars. That would save a lot of money on repair bills! When I need Darla to do something mechanical, I call my brother Paul, who is an electrical engineer. He’s the mechanical part of Darla’s brain that my wife and I both lack.


I couldn't put "Ashfall" down and I kept wondering how everything was going to wrap up... and now that I've had the pleasure of  reading a preview of "Ashen Winter" ... I know a lot more of the story. Will this be a trilogy... or are you taking the story further? Fans want to know!


I planned Ashfall as a trilogy from the beginning—roughing out a story arc for three books before I even began writing the first. I’ve sold the final book to Tanglewood Press, and I’m currently working on writing it. I’m also working on a short story about everything that happens to Darla between the supervolcano eruption and when she meets Alex. When both those projects are finished, I plan to move on to one the many other novel ideas clamoring for my attention.


And, finally, this is such a visual world that you've created. Any calls from Hollywood asking you to write a screenplay?


Tanglewood Press is trying to sell movie rights to Ashfall. So far, they haven’t had any takers, but if the books continue to sell as well as they have, I imagine that may change.


Thanks for interviewing me for The Militant Recommender—I deeply appreciate your enthusiasm and support! 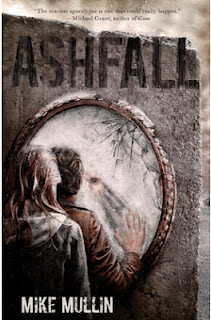 More info for fans of  "Ashfall" :


Mike Mullin’s first job was scraping the gum off the undersides of desks at his high school. From there, things went steadily downhill. He almost got fired by the owner of a bookstore due to his poor taste in earrings. He worked at a place that showed slides of poopy diapers during lunch (it did cut down on the cafeteria budget). The hazing process at the next company included eating live termites raised by the resident entomologist, so that didn’t last long either. For a while Mike juggled bottles at a wine shop, sometimes to disastrous effect. Oh, and then there was the job where swarms of wasps occasionally tried to chase him off ladders. So he’s really hoping this writing thing works out.


Mike holds a black belt in Songahm Taekwondo. He lives in Indianapolis, Indiana with his wife and her three cats. ASHFALL is his first novel.


Many visitors to Yellowstone National Park don’t realize that the boiling hot springs and spraying geysers are caused by an underlying supervolcano. It has erupted three times in the last 2.1 million years, and it will erupt again, changing the Earth forever.


Fifteen-year-old Alex is home alone when the supervolcano erupts. His town collapses into a nightmare of darkness, ash, and violence, forcing him to flee. He begins a harrowing trek in search of his parents and sister, who were visiting relatives 140 miles away.


Along the way, Alex struggles through a landscape transformed by more than a foot of ash. The disaster brings out the best and worst in people desperate for food, clean water, and shelter.  When an escaped convict injures Alex, he searches for a sheltered place where he can wait—to heal or to die. Instead, he finds Darla. Together, they fight to achieve a nearly impossible goal: surviving the supervolcano.

Posted by Stephanie at 3:21 PM