On the Beach: "Grief Cottage" by Gail Godwin 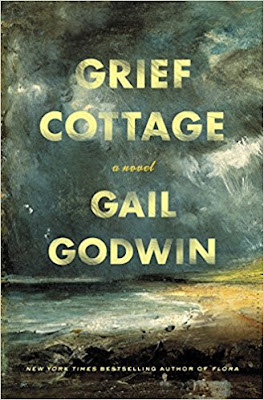 Eleven year old Marcus Harshaw suddenly finds himself orphaned after his mother never returns from fetching them a pizza for dinner. After a stint in foster care he is sent to live with his only relative, his Great Aunt Charlotte, an artist, who lives in a beach house on a South Carolina island.
Beautifully told in Marcus's words as he looks back at this new life on the beach,  a place that sounds so perfect, that the Recommender is ready to relocate!  Marcus explores the island and meets some of the locals including a very charming gentleman who is a close friend of  his Aunt's.
Before Marcus's arrival, Aunt Charlotte had lived a solitary existence and Marcus wonders how he will fit into her home life as she often barricades herself in her studio coming out only for more wine, the occasional banana or cup of yogurt.
He worries that she may tire of him and yet, all who meet him are impressed by his intelligence and his open and inquisitive nature.
Almost at once, Marcus is sent off to walk the beach, and to eventually make the acquaintance of Grief Cottage, a derelict beach shack that was long ago the scene of a tragedy during a hurricane, and the subject of so many of his Aunt's paintings that it helped to pay her bills.
Drawn to the cottage after reading its history about an un-named family that perished during that storm, one of whom was a teenage boy, Marcus believes he senses a presence there, perhaps the ghost of the boy. Is this a menacing spirit? Or one trying to connect with him, another boy, who may be able to help him.
Whether this ghost boy is real or something Marcus imagines is only one aspect of this appealing story. If you are looking for something more thoughtful to read on vacation than the usual summer fluff, look no further than Ms. Godwin's Grief Cottage.