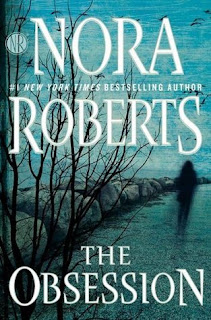 When you work in a library you get to know what patrons like and over the years the Recommender has checked out and in a heck of a lot of books by Nora Roberts (plus another heap by J.D. Robb)...and yet, I had not read a single one.
I was perhaps falsely under the assumption that anyone who is THAT popular and can write THAT many books... may not be as good as people claimed.
All that changed when a co-worker (Jessica) said "I think you'd like this book. It's dark."
Me? Like something by Nora Roberts? And...do I have a reputation for reading "dark"??? (I do like subject matter that deals with the world ending or missing people or vampire romances or, of course, Phantom of the Opera themes, so yes, that part is true!).
The book that caused me to realize Ms. Roberts is a writer that grabs you right from the start...or at least her latest book Obsession did. It's a book you don't want to put down and it begins with a brave little girl. One who performs an act so daunting and heroic and one that changes her life and the lives of her extended family.
Naomi Bowes, unable to sleep because of the heat one summer night, watches out her window and sees something odd. Her father going into the woods with a flashlight.
Could he be going down to the creek to cool off? Scrambling after him she follows behind, not to the creek, but deeper into the woods. She watches him uncover something, then disappear into the ground.
What could he be doing down there? Maybe putting together a new bicycle for her birthday. She hides until he leaves, but there is something about her father, a strict religious man who was an upstanding member of the community... that frightens her.
Holding her breath, she waits until he is out of sight, then opens the door in the ground and makes her way down, following a series of strange sounds. Maybe he got her a puppy, she thinks, but it is no puppy awaiting her. Instead, she sees a naked teenage girl. One who was beaten and bloody and tied up with tape over her mouth.
Without hesitation Naomi releases the girl who is so injured and weak that Naomi must help her to navigate the woods into town and to the police dept. In her search for something to free the girl from her restraints, Naomi finds evidence of other crimes. Crimes too horrible to imagine.
We'll stop there. This is already too much information, but the book jacket gives you this much right up front. And like most of the books the Recommender looks for, it is one that will keep you up all night. Naomi is a wonderful, admirable character and the reader will follow her through this ordeal and into the future. You'll have to get a copy of Obsession to see what Ms. Roberts has in store for Naomi.
Needless to say, I have a lot more respect for Nora Roberts and all those checkouts! 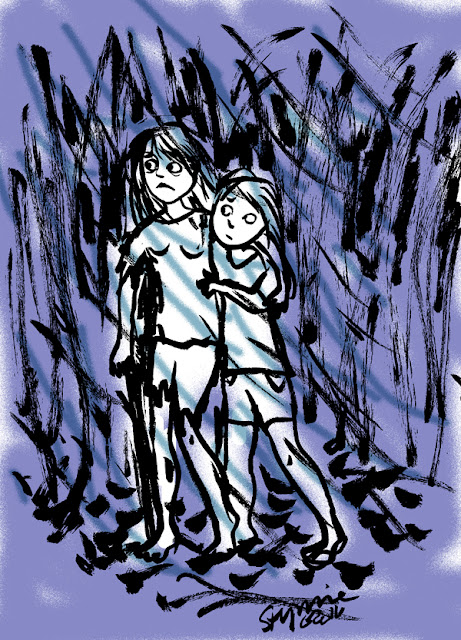 And in another mix/tape review, this song, 'Bad Blood' by Alison Mosshart, was featured on "The Walking Dead" as a theme for Carol and it seemed to fit Naomi as well. Thank you Youtube!
Posted by Stephanie at 7:30 PM