Going for the Gold: "Roses and Rot" by Kat Howard 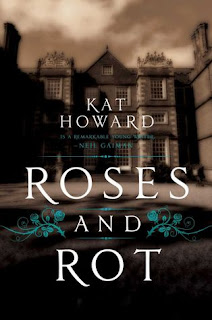 As we learn in Kat Howard's glittery , gorgeous and atmospheric debut, Fairy Tales don't always have happy endings, not for everyone, and when they do... the hero, or heroine, must survive an ordeal to find their way out of the forest, and possibly, into the castle.
Imogen and Marin are sisters. Sisters as different as night and day. One dark and one fair. At one time they were as close as any two people could be... but then Imogen must flee their family home and the way to do that, to survive, was to go to boarding school and leave her precious sister behind.
Now, both grown-up and talented in their own unique fields, Marin has reached out to Imogen to join her in applying to a very prestigious Arts Colony, Melete, in the wilds of the New Hampshire woods.
Both sisters are accepted and Imogen finds herself in an enchanting world of esteemed mentors and talented new students. Settling into the tower of one of the assigned student houses, this one a fantastical Queen Anne, seemingly perfect for inspiring new ideas for her writing project, she unwittingly annoys another resident who had designs on that very room. Helena, a poet, with published works and an attitude to go with them.
Soon she is joined by Marin and a new friend, a singer/songwriter, Ariel. Hoping to put their past behind them and embrace a new closeness as both sisters and artists, they are at first tentative to talk about their past... and the mother who sought to turn one against the other as girls. It is clear they have a lot of baggage to unpack over the nine months they will spend at Melete. Marin, leaving her dance company to seek guidance from one of the most acclaimed (and handsome!) dancers in the world of ballet.
And Imogen, a writer of original, dark fairy tales, will be mentored by her favorite author.
Can anything be better than that?

Yet... there had been rumors about Melete. Those that are accepted must do the best work of their lives. They want to please their mentors, but is there something else going on?  And odd things seem to happen. It's almost as if they are being watched. Eyes seem to be everywhere. Will the sisters gain fame and fortune from their stay? And what must they give up to attain it?
"Roses and Rot" is a memorable and haunting journey. You'll find yourself thinking about it long after you've turned the final page, like the very best of fairy tales and legends. This book is highly recommended. 5 stars. In fact, make that a ceiling full of stars!
Thank you to Edelweiss and Simon and Schuster for the DRC! 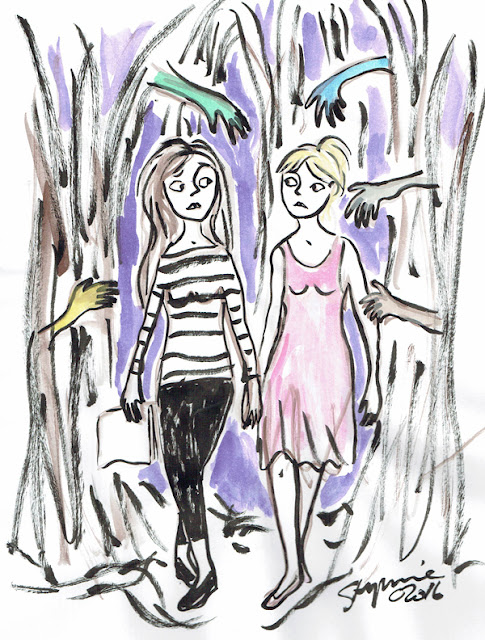 Posted by Stephanie at 4:39 PM