The Recommender's husband recently commented on the Recommender's preference for reading Phantom fiction "How can there be that much to say about 3 characters?"  Indeed. The variety of Phantom fiction knows no bounds! I was scrolling through Amazon to see what I hadn't read and a title caught my eye. Destruction of Obsession,  by Catherine Miller, which turned out to have originated, as many great Phantom stories have, on a Fanfiction site. So, I downloaded it immediately!
It is a charmingly different follow-up to Leroux's classic. Christine has turned the scorpion and made the choice to save her beloved Raoul's life and marry Erik, her Angel of Music and the mad man who has wreaked havoc on the Opera House at large. And, so begins their life together. Can she learn to truly love the man who will now be her husband? She made her promise to him and being good to her word she attempts to fit into his world. He is kind to her and prepares her meals but doesn't force himself on her as she fears he might...and then, though he sees no need for it, to make her happy, Erik arranges for a real wedding, to be presided over by an actual priest. Hoping that this gesture will help her accept him as her true husband. That the priest is blind doesn't negate the bond that now legally unites Christine and Erik. When his lovely bride is attacked by the carriage driver on their return to the lair, after Erik leaves her alone... he rescues her and kills the driver. An act for which she finds she feels no remorse.
As she heals and he cares for her they make their way towards a comfortable domesticity and although Christine felt she could not open her heart to any but Raoul...she slowly seems to find that there is far more to the Phantom than she thought.
Using Leroux's third person self referencing voice for Erik, Ms. Miller brings him to life with all his passion and pain, his genius and madness. Christine begins the story as a frightened and confused girl of 16 and over the course of this story grows to be a young woman with passions of her own.
There are moments that might surprise you and, if you love the Phantom and Christine...you will be caught up in the author's original interpretation of this great love story. If you are in the mood for a Phantom fix... then be sure to treat yourself to this thoroughly addictive read! 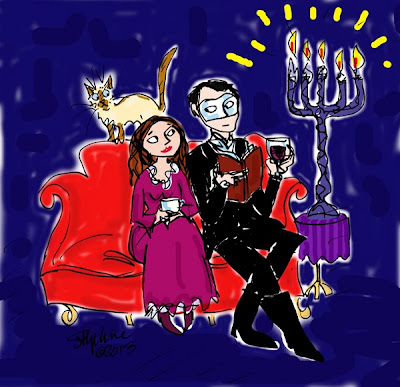 Posted by Stephanie at 6:07 PM