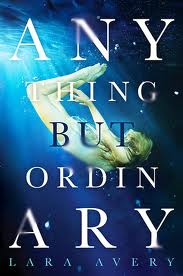 The Recommender is recommending Lara Avery's Anything But Ordinary this week because it is an Olympic summer and Bryce Graham, our heroine in this extraordinary story, is an Olympic contender. She is a 17 year old diver who, when reporters asked her her secret, replied concentration, or focus... but never mentioned fear. Or space. The lack of it... the length of a cicada (relevent when you read the story), one inch...was all it took to end Bryce's career at the Nashville Olympic Diving Trials when she overshoots her dive by that amount and hits her head on the cement.
She wakes to find herself in a hospital. Machines are beeping. Her parents are there but they look different, somehow. Her Mom's hair is shorter. Her Dad's thinner. She'd been in a coma, apparently... but for how long? She asks and her parents and the doctor all glance at each other. Where's her little sister? "She's... gotten older. We all have, even you" her mother tells her. What IS going on?
Then a strange girl enters her room. She's dressed in fishnets and boots. Wait a minute. Is THAT her 12 year old sister, Sydney? She asks Sydney her age and she tells her...17. How can SHE be 17 when Bryce is 17? Or WAS 17. She'd been asleep for 5 years! She was 22! A grown-up!
This is all just the beginning of a book that makes you appreciate every minute. Bryce is given her life back, but what she does with that life and how it affects her former best friend and her highschool boyfriend, her parents, her sister and... Carter, the caring young med student who befriends her (and what's his secret? Why does she feel like she knows him?) is what makes this such a compelling read.
Bryce is a young woman who comes alive on the page. We care about her.  It's such an unputdownable bittersweet story that you may want a box of tissues within easy reach. Or maybe two.
Posted by Stephanie at 5:15 AM