Walk on the Wild Side: "My Best friend, Maybe" by Caela Carter 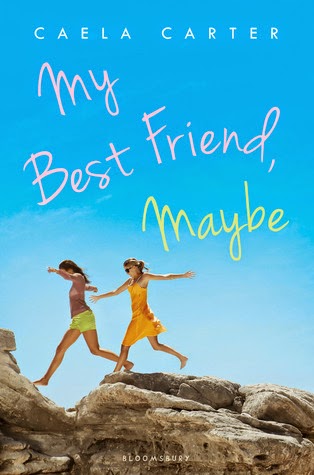 Colette was once very best friends with Sadie. At one time, when they were little girls,  they were inseparable. They both loved to swim. They each had two brothers, though Sadie's were adopted from Haiti. There were other differences, too. Sadie's Mom was loving and laid back (and there's no Dad in the picture). While Colette's family is very religious, particularly her judgmental Mom. But both girls felt comfortable at each other's homes and go on vacations together and, somehow, Colette's Mom seems to share secrets and laughs with Sadie in ways she doesn't do with Colette.
Then, when they were in Middle School, suddenly their friendship falls apart. The closeness they once shared now Sadie is sharing and whispering and laughing with other girls. She has moved on and left Colette behind.
Flash forward three years, Colette and her boyfriend, Mark, are looking to spend the summer in Costa Rica with their church youth group. Mark is then heading off to college and Colette and her non-churchy best friend Louisa will be looking at starting their senior year. Her life is very normal and safe and... boring.
Boring, until Sadie whirls back into her life with an invitation to join her and her family in Greece for her cousin's wedding. In fact, Sadie has bought "Coley" as she has always called Colette, a plane ticket!
And, before she even has time to think it over, she's telling Sadie that she'll go. That she has missed her one time best friend and Sadie's warm and fun family and maybe it's time to find out who she really is, away from being the good, safe, sensible daughter, friend and girlfriend everyone wants her to be.
My Best Friend, Maybe is a realistic look at what it means to have had the closeness of a best friend and the pain of losing that friendship. Sadie and Colette are complex   characters. Both are angry and hurt and ready to blame the other for the past. What was the misunderstanding that caused the rift? Can they ever regain what was lost? And, Greece is another character in the story. Beautiful, exotic and filled with possibilities. This is a wonderful book to enjoy on a summer's day and perfect to bring along on vacation. It's not light reading. It's thoughtful and insightful but also completely addicting! Highly recommended!

Posted by Stephanie at 8:51 AM