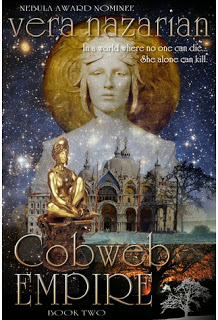 The Recommender was so excited about the sequel to Vera Nazarian's The Cobweb Bride that when I saw there was an indigogo campaign  to get it published, I had to kick something in (wish it was more!) and now I have just finished Cobweb Empire and it is epic! Ms. Nazarian is a truly magical writer. We pick up where Cobweb Bride ended and Percy, the smart and brave peasant girl, has become (sorry, spoilers for any who haven't read the first book!) Death's Champion and one of her first acts is to give her beloved grandmother the gift of final rest by uniting her death shadow with her body. She also ends the suffering of a pig who had been unsuccessfully butchered. Now, she is on a quest to find Death's intended along with a last few Cobweb Brides, the dead Infanta of the Realm, Grand Princess Claere Liguon and her murderer Vlau Fiomarre. They are accompanied by Lord Beltain Chidair, the dashing Black Knight and son of the nasty, undead ruler the Duke Ian Chidair (or Hoarfrost, as he's known). We also get an inside look at a kingdom, or, perhaps Queendom is a better description... which is ruled by a woman, Rumanar Avalais, who is so all powerful and so beautiful she is called by her subjects "Your Brilliance"! Is she as benevolent as she seems? And, she has taken Vlau Fiomarre's disgraced brother and father under her protection. To what end? We also get the POV of two aristocrats who had gone on a lark to Death's Kingdom along with their so called friend who, when they've been captured by Duke Hoarfrost's undead soldiers and thrown into a dungeon, seems to have allied herself with the dead duke! These are just a few of the events and characters you'll encounter on Percy's journey to find Death's lost love (and...perhaps find one of her own!). This is just a beautifully written and detailed series and highly recommended! I, for one, will be ready to join another indigogo campaign to get Cobweb Forest finished! 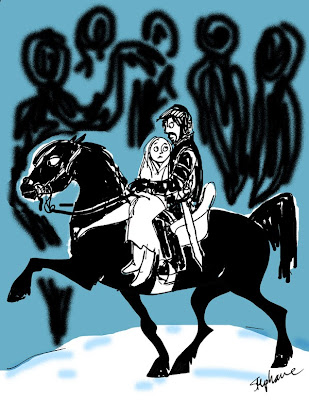 Posted by Stephanie at 3:35 PM