Dreaming of You : "Prelude: Scherzo" by J.M. Smith 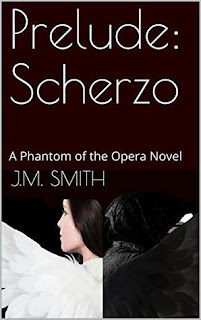 So much happens in this third in J.M. Smith's Prelude series, that I have to start out this review of   Scherzo, with a spoiler alert. Well, if you've made it this far you'll already know that Erik is DEAD!
Wait, or is he?
Annie, hearing her beloved Erik has died in far away Mazandaran, where he had gone to design a Palace for the Shah, collapses from the shock. And Giles Giry is there to catch her. Puzzling over the news that her brother died in the place where Annie's fiancé was working as chief architect, he eventually learns the truth. And rather than turn away from this ruse, he sympathetically reaches out to her, sheltering her in his home, caring for her, providing what nourishment she will take and finding himself deeper and deeper under the spell of the beautiful ballerina.
Could Annie ever love this man, the polar opposite of the dark and troubled Erik?
And, aha! News of Erik's demise has been greatly exaggerated. Well, somewhat exaggerated, as he is locked in the Shah's prison, and has given up the desire to live.
Knowing he might never see his beloved Annie, again, and despising himself for his drug-fueled role as the Shah's Angel of Death, the Shah's executioner, he has accepted his fate. The hateful Shah forced Erik to operate the torture chamber he designed for him, executing not just criminals but political prisoners! What happened to that new Palace he thought he was commissioned for?
Refusing to eat and existing in total darkness, he is jolted back to some semblance of life when a beautiful young Persian girl, Yasmin, is instructed to take charge of his meals. Through her persistence, Erik reluctantly begins the slow road to recovery.
And this is just the beginning!
There is so much more to come!
J.M. Smith has given us a whole new spin (to the Recommender, anyway) on the Phantom story, not just giving us a plausible relationship between Erik and Antoinette, one that was hinted at in the Gerard Butler film of the ALW musical and more briefly in the stage version, but bringing to life a very likable Giles Giry, a man who is intelligent, handsome, loving and compassionate. We needed to see what kind of man Madame Giry had been married to... and we will find out how she became the widowed ballet mistress we all know and love. No more spoilers! If you love Phantom and all the versions such a great variety of Phan authors have graced us with, then you don't want to miss the Prelude series!
And don't forget, J.M. Smith is also the author of one of my very favorite Phantom books, The Secret Door! If you haven't read that one yet, you are in for a treat! 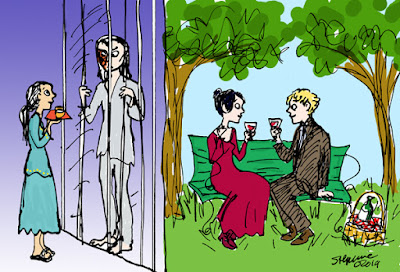 Posted by Stephanie at 8:13 AM