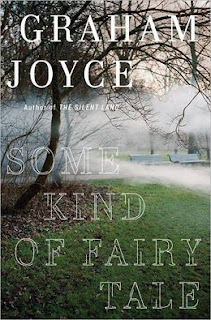 Posted by Stephanie at 6:00 PM No comments:

Love and Death: The Cobweb Bride by Vera Nazarian

The Cobweb Bride by Vera Nazarian is a haunting, beautifully written story that reads like a legend, it is so well told. From the first pages the author weaves a spell that draws the reader into the world she has created. 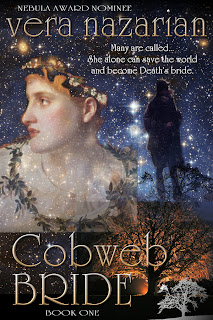 It is an imaginary European Renaissance world of cold, ice and snow. In the Kingdom of Lethe, one of three kingdoms of the Imperial Realm, an old queen lays dying. Her family in attendance notice a dark shadowy figure. It is Death in the guise of a man, a Spaniard, he moves away from the queen and proclaims he has come for his Cobweb Bride and will take no others until he has her by his side. In other words...no one will die until he finds her.
This has dire consequences for those, like the queen, suspended in their final moments...and even worse for those, like the knights and soldiers involved in battle between two warring Dukes, Duke Hoarfrost and Duke Goraque who bludgeon and strike each other to the death, hacking off arms, legs and even heads!...and yet, none of the mortally wounded fall, they keep fighting, including a knight who receives a final blow from Hoarfrost, himself, who then rises and spears the Duke in the back... killing him, and sending him through the ice of a lake from which he returns, one of the new undead, whom his brave son, Beltain, must now serve.

Meanwhile, another old woman is waiting to meet her end in the little village of Oarclaven. The grandmother of the Aryen clan. One of her three granddaughters, Persephone (called Percy), sees a dark shadow waiting by the bedside. When she mentions it to her mother she angrily demands Percy leave the house.

And in another part of the kingdom, in the Silver Court, the daughter of the Emperor, Claere Liguon, the Infanta, is about to turn 16, and everyone but everyone is at court to celebrate. She is about to receive a gift that will change her life...forever.

Back to the dying queen. The prince issues a proclamation requesting every family in the kingdom with daughters of a marriageable age, must send one to be the possible Cobweb Bride and to seek Death in his keep in the Northern Forests of the realm. Percy chooses to sacrifice herself and go forth in quest of Death's domain, as she knows she is her mother's least favorite daughter, being a plain girl and not a great beauty like her sisters.

Then, there is Death, himself, the mysterious presence, both shadow and man. His desire for the mystery woman has brought the known world to a halt and all its inhabitants to become momentarily immortal... a state of being abhorrent to some... but deeply coveted by others.

Thus begins this captivating story (plus it has a stunningly beautiful cover!) , which is the first of a trilogy. I loved the author's gorgeous imagery and her wonderfully realized characters who come to life, or unlife, on the page and thoroughly involve you in their destinies.   I can't wait to return to this world in the next two books! 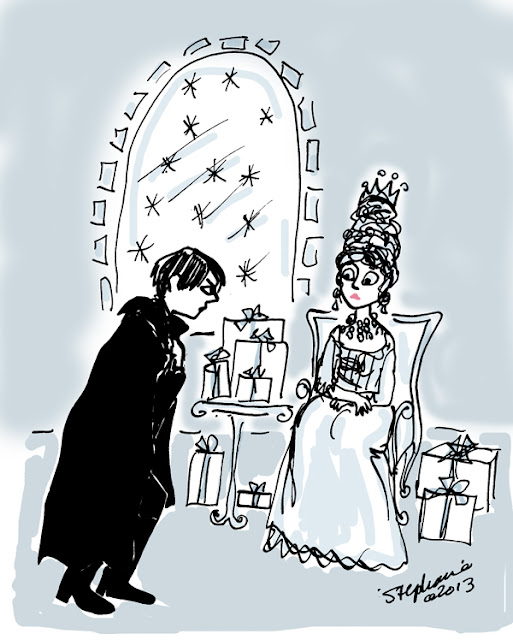 Posted by Stephanie at 11:03 AM No comments:

"The Dark Monk" by Oliver Pötzsch 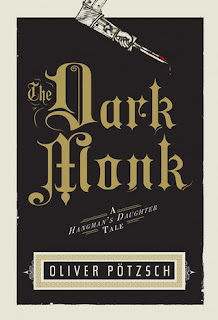 Having just finished the Dark Monk, the second book in the Hangman's Daughter series by Oliver Pötzsch, the Recommender can say it was every bit as good as the first one! Set in Bavaria in the 1600's...it's a dark time in the little town of Schongau, robbers are afoot, the local priest has died under very mysterious circumstances, not simply from overeating as everyone thought. There's a dire fever plaguing the citizens and former medical student Simon has his hands full trying to help his doctor father and also with his love for Magdalena, the daughter of Jakob Kuisl, the hangman and healer. Jakob is considered an untouchable by the locals because of his inherited profession despite the fact that he's smart, well read and an ace healer. Magdalena is thought of as equally "unclean" and if she and Simon were to marry... it would lower his station in town and they might even be driven out of of the community. Dark days, indeed!
With the priest's demise, Simon is sent for and while investigating begins to suspect something sinister and drags Jakob and even Magdalena into the mystery. Enter a new character, the deceased priest's sister, Benedikta, a worldly, attractive woman who seems as comfortable on a horse as she does with a pistol in her hand. Could Simon have eyes for this stranger? Magdalena is suspicious as Simon helps Benedikta to solve clues and cover-ups and riddle after riddle that seems to be leading them on a treasure hunt. Meanwhile Jakob is being forced to lead a hunt for the robbers and Magdalena is trying to forget Simon by setting off on her own adventure. What will happen to our heroes? Read this fantastic book yourself and find out!
The Recommender LOVES the hangman and all the main characters in this series. A likable hangman, you might ask? Yes, Jakob is an extremely likable, compassionate and sometimes cynical man making the best of his lot in life, he's a good and loyal friend and family man and  not afraid to stand up for what he believes in. Not a bad role model. I'll be starting book three in the upcoming weeks. 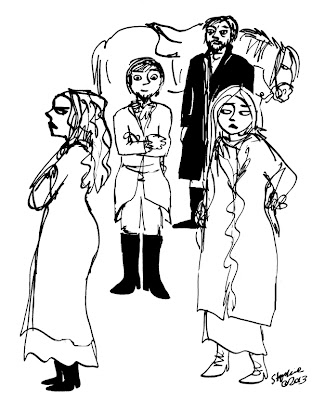 Posted by Stephanie at 12:45 PM No comments: