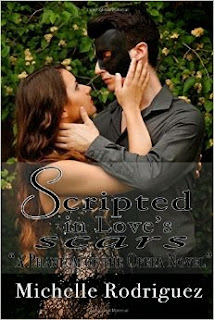 Michelle Rodriguez brings something new to the Phantom canon. I adored her Opera Ghost Unraveled and her short stories are breathtakingly romantic. Now, she has released another full length Phantom novel, Scripted in Love's Scars,  and needless to say, she doesn't disappoint!
The story begins when Christine is being inducted into the Paris Opera House ballet corps. A rite of passage is to shove the aspiring ballerinas, one at a time, into the first cellar of the Opera House and hold the door closed for several minutes to see if she would survive an encounter with the Opera Ghost. He was more myth to them than reality, and when confronted by the ghost himself, most of the girls would shriek and panic and then, later, add their tale to the Opera Ghost legend.
Christine is pushed through the door into the blackness of the cellar. She doesn't have long to wait before the Ghost makes an appearance. But something is different about this girl, Erik finds. She stares back at him, and for moments they are locked in each other's gaze, Erik captivated, yet feeling oddly exposed, even though he wore his mask. Then she is gone, as Meg pulls her back into the light.
But not gone for good, as this is where Erik realizes their destinies would become intertwined, as he thinks, and not long after, materializes before her in the closed up Opera House, as Christine tries to rehearse her ballet moves, alone on the stage. At first he is a voice from the darkened theatre, giving her suggestions on how to improve on her ballet training... but, when he finds her heart is not in the dance, but in music... he comes closer, becomes her Angel of Music... and well, so much more!
So, we do have our Erik and Christine passion play brought about with a fresh interpretation, but we also have a drama to contend with, about which I will say no more, because there were moments that were so tense and suspenseful and...well, I really wondered what was going to happen, and on more than one occasion I had to shout "Oh NO!!!" at my copy of this wonderfully addictive story! This was one of those books you don't want to end it is so good and it's one I highly recommended for Phantom Phans or anyone who enjoys a good, compelling and genuinely romantic story!

Another unique aspect to Ms. Rodriguez's books is the very talented cover artist, photographer and designer she works with, Jessica Elizabeth. I've come to look forward to her vision of each book as she captures the spirit of Erik and Christine on each cover so perfectly! 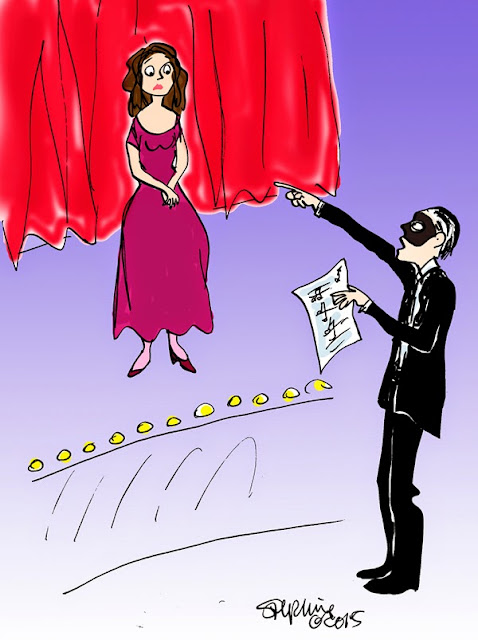 Posted by Stephanie at 9:40 AM