Return of the Phantom: Variations on a Theme of Leroux 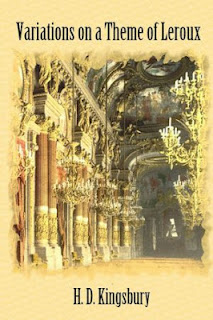 As the Recommender reads her way through the Phantom oeuvre it is always fascinating how different authors tackle the canon of  Gaston Leroux's characters... in particular the triangle of Erik, Christine and Raoul. I just finished H.D. Kingsbury's Variations on a Theme of Leroux which was great fun and an intriguing take on the story.
It begins with Erik wakening to find himself imprisoned in a dungeon and beaten and starved. How did this happen to our anti-hero? His thoughts are of Christine. Would he ever see her again? Would she ever know what became of him?
The story shifts to a time a year earlier. Christine has been receiving voice lessons from Erik. She has visited him in his secret home in the cellars beneath the Paris Opera House and knows the way there, unescorted. They are very companionable... until a childhood friend of hers shows up to get in the way. Yes, it is Raoul! He is charmed by her and invites her to lunch and they spend a pleasant afternoon together. When she returns, Erik is annoyed. But why should he be? Christine is his student. Does he feel more for her than he is willing to admit? Does she? And then there is Anatole Garron, an Opera tenor who is Christine's friend. And Meg Giry... jealous of Raoul's interest in Christine. The plot thickens. Christine invites Erik to a picnic atop the roof of the Opera House. Someone follows. Seething with unrequited passion... it is Raoul! What he sees makes him seethe further. Christine pledging her love for some masked man and embracing him! How could she choose some nobody with half a face when she could have him? A Vicomte! What to do? Can he win her back?
This is a great story of love and passion (and even sex!).  There are dastardly deeds, unexpected friendships and alliances and... well, you'll just have to read it yourself to find out if Erik escapes his prison and finds true love with Christine or if Raoul will win out. That is, as always, the question!
Posted by Stephanie at 4:48 PM